From time to time users face bizarre problems that after hours/days of investigation turn to be caused by 3rd party softwares that modify normal operation of Windows OS and cause troubles. As most problems are caused by badly written antiviruses, we recommend using Microsoft Security Essentials that is known to be OS friendly, working fast and without issues.

Here is a list of 3rd party software that are known to cause problems:

1. Avast Antivirus – specifically it’s Autosandbox feature messes up with operating system and effectively disallows application to write data to the disk. Which means that any of your changes to the data, watch lists, drawings, etc, will not be saved unless you turn off Autosandbox or uninstall Avast. Avast has its “heuristics” all wrong. They use Autosandbox even on legitimate, Microsoft Authenticode digitally signed applications like AmiBroker. Solution: uninstall Avast and install Microsoft Security Essentials instead.

2. Comodo Internet security – the same story as above – their “Sandbox” is messing up with OS and blocks applications from vital activity such as saving files or accessing registry. Their “sandbox” causes files to be stored in wrong places and become inaccessible. Either turn off sandbox or uninstall Comodo and install Microsoft Security Essentials instead.

3. Webroot Secure Anywhere – again it messes up with operating system causing problems with Windows Clipboard, preventing Edit->Paste from working in many applications including the new AFL editor. The solution is to go to Webroot Identity Protection settings and turn OFF Identity Shield. The issue affects many applications and is described in detail on their forum:
https://community.webroot.com/t5/Webroot-SecureAnywhere-Complete/Copy-Paste-Stops-Working-in-some-applications/td-p/21588/page/4

4. AMD Catalyst Software Suite, Desktop Desktop Manager – it may cause problems with saving window positions because it has a feature called “Dialog repositioning” that moves windows by itself somewhere else. AMD of course knows better where you want to have your windows. Solution: disable “Dialog repositioning” as shown below or turn off “Desktop Manager” feature. You may also uncheck “Preserve application position and size” box because AmiBroker remembers positions of all its windows by itself and does not need AMD’s help. 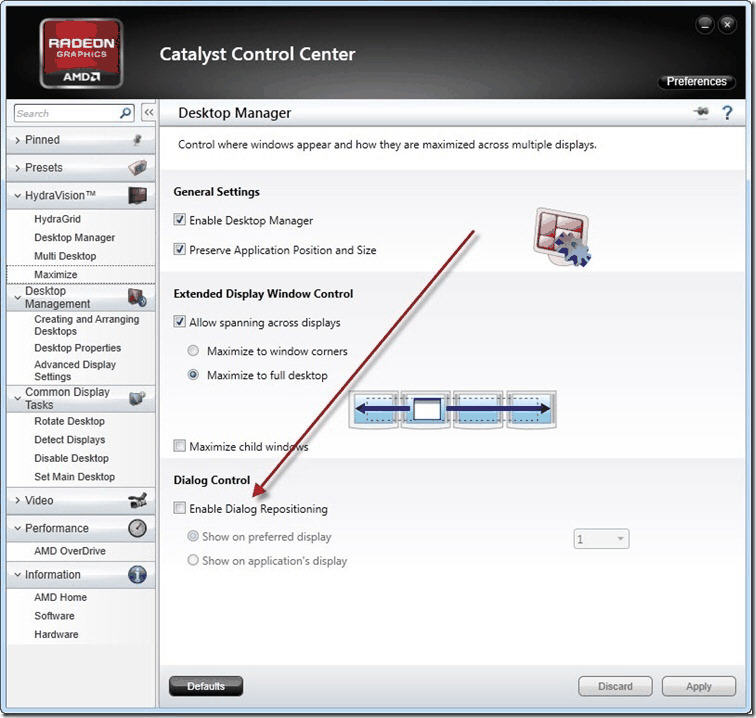 For the list of recommended hardware and software see: http://www.amibroker.com/kb/2011/10/25/recommended-hardwaresoftware-for-amibroker/

Filed by Tomasz Janeczko at 5:16 am under Troubleshooting
Comments Off on Third party software “black list”