Do NOT use “registry cleaners” to avoid problems

Every now and then a user contacts support saying that some functionality (like OLE interface) stopped working and after some e-mail exchange it turns out that the culprit was a “Registry Cleaner” program that was run and deleted some vital registry entries.

I already warned users NOT to use “registry cleaners” or “memory turbo” here:
http://www.amibroker.com/guide/x_performance.html

These programs are written pretty much often by amateurs and they often blindly delete registry entries that they assume are “no longer used”. First off, there is no freaking way a 3rd party program can ever determine when a registry key is “unused”. It was evidently put there for a reason and could have been accessed hundreds or thousands of times. “Registry cleaners” usually make assumptions that are simply not valid. For example, they may check for the presence of file referenced by the registry key, but they silently ignore the fact that the file may be on removable media (such as USB disk) and that Windows may change drive letters when new drive is inserted. In such cases “registry cleaner” would delete perfectly valid registry key causing problems with the software that was using this key.

AmiBroker can live with most of its registry entries deleted (you would lose all your UI customizations though) with one exception: OLE. AmiBroker exposes OLE automation server (Broker.Application) and if 3rd party “registry cleaner” wipes its registry keys, the OLE would stop working. This affects also auto-import feature in AmiQuote as it relies on AmiBroker’s OLE automation server.

So bottom line is: To avoid problems DO NOT USE “registry cleaners”.

More evidence of problems caused by “registry cleaners” can be found here:

Now, what to do if you already run registry cleaner and have problems?
The solution is to use full setup again. You do NOT need to uninstall anything, you don’t need to delete anything. Just run the setup again over existing installation, with “Full Installation” option selected as shown in the picture below: 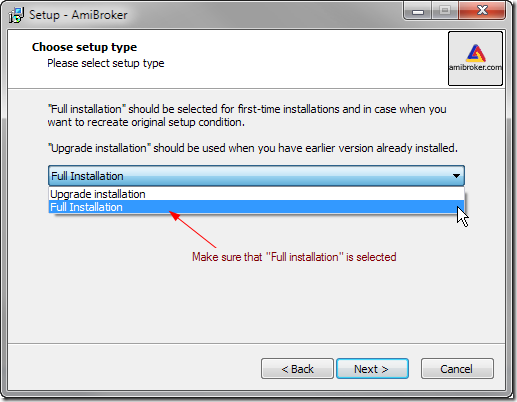 That should cure the problem with OLE within seconds. Good luck!

Filed by Tomasz Janeczko at 12:57 pm under Installation
Comments Off on Do NOT use “registry cleaners” to avoid problems